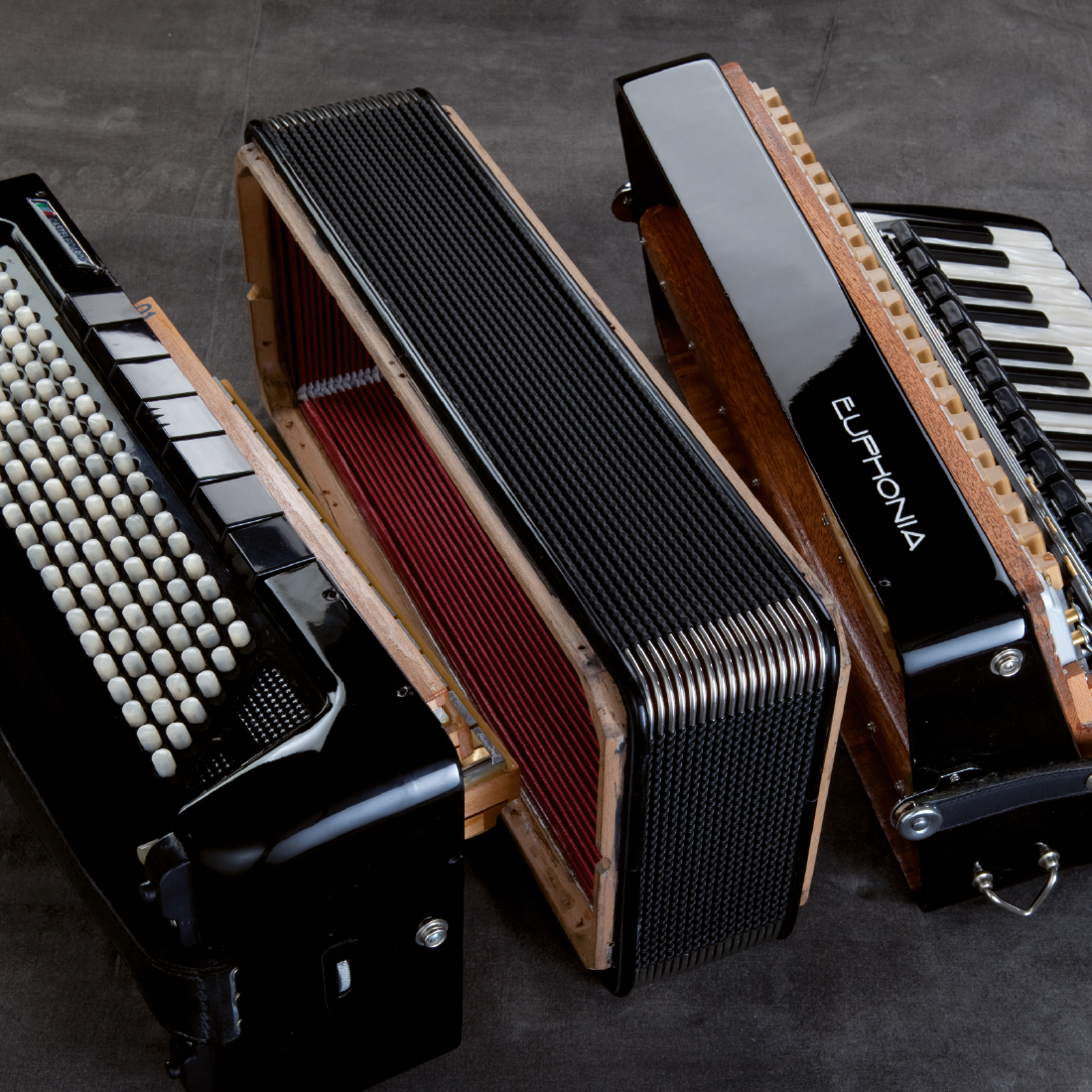 Accordions:
How it's made

The accordion consists of three main components: the reed chamber for the right hand manual, the bellows and the reed chamber for basses or the left hand manual. As far as the treble side is concerned, there are two types of instruments: one with a keyboard or piano system and one with a buttonboard.
A keyboard accordion can house maximum 47 buttons (from D# to C#) and 120 basses, whilst the button accordion can house up to 64 notes which can be further divided into two categories: the Swedish system (better know as the international system) and the Russian system, used in Eastern European countries.

In the accordion, sounds are produced by metal reeds which vibrate when stimulated by the air flow caused by the movement of the bellows. Each button corresponds to a sound, produced by 2, 3 or 4 reeds, which vibrate together to convey strength to the sound and produce different registers. An accordion is classified as a 2 - 3 - 4 voice accordion depending on the number of reeds in use simultaneously selecting the master register; there are also some 5 voice instruments.
As far as basses are concerned, there are two types of instrument: standard bass and free bass accordions. In the former type, accordions usually have 5 voices, some student models have 4 and just a few models have 6. In the latter one, voice combinations can start with 1 octave (low octave) if it is a student model, 2 octaves (low octave + clarinet) if it is a semi-professional instrument up to maximum 3 octaves, adding the piccolo voice. Single bass notes start from 37 notes up to 64 notes in the Bayan. 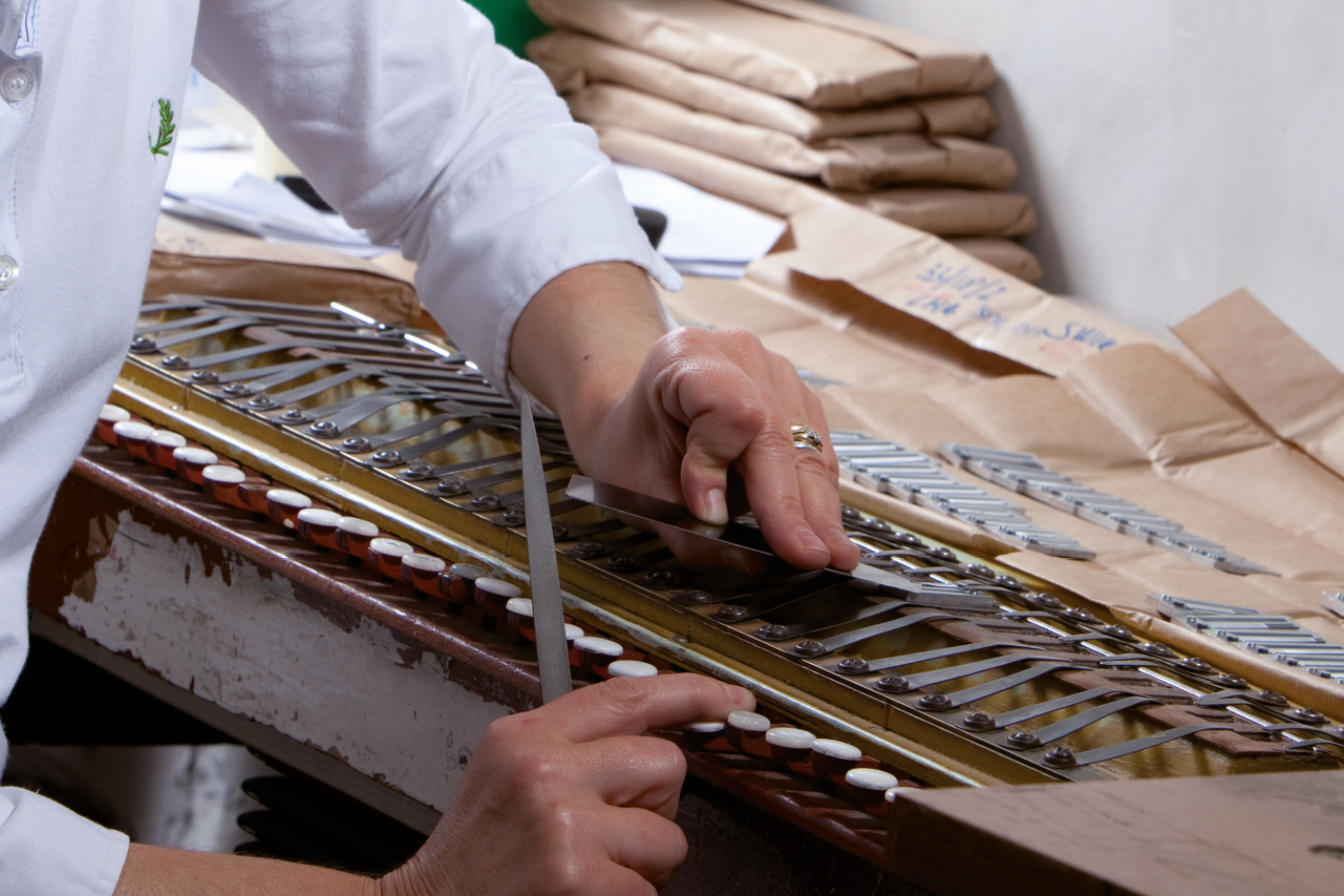 While for all classical music instruments the tuning is carried out in unison, for jazz instruments there is a light violin which is achieved by tuning a row of voices (clarinet) a little bit higher, with some cents more compared to those of the central clarinet. In the accordion used for popular music, the clarinet is set at 440Hz, two further voices are then set at the same octave but with a higher tuning and the other one with a lower tuning, thus creating the famous musette effect. 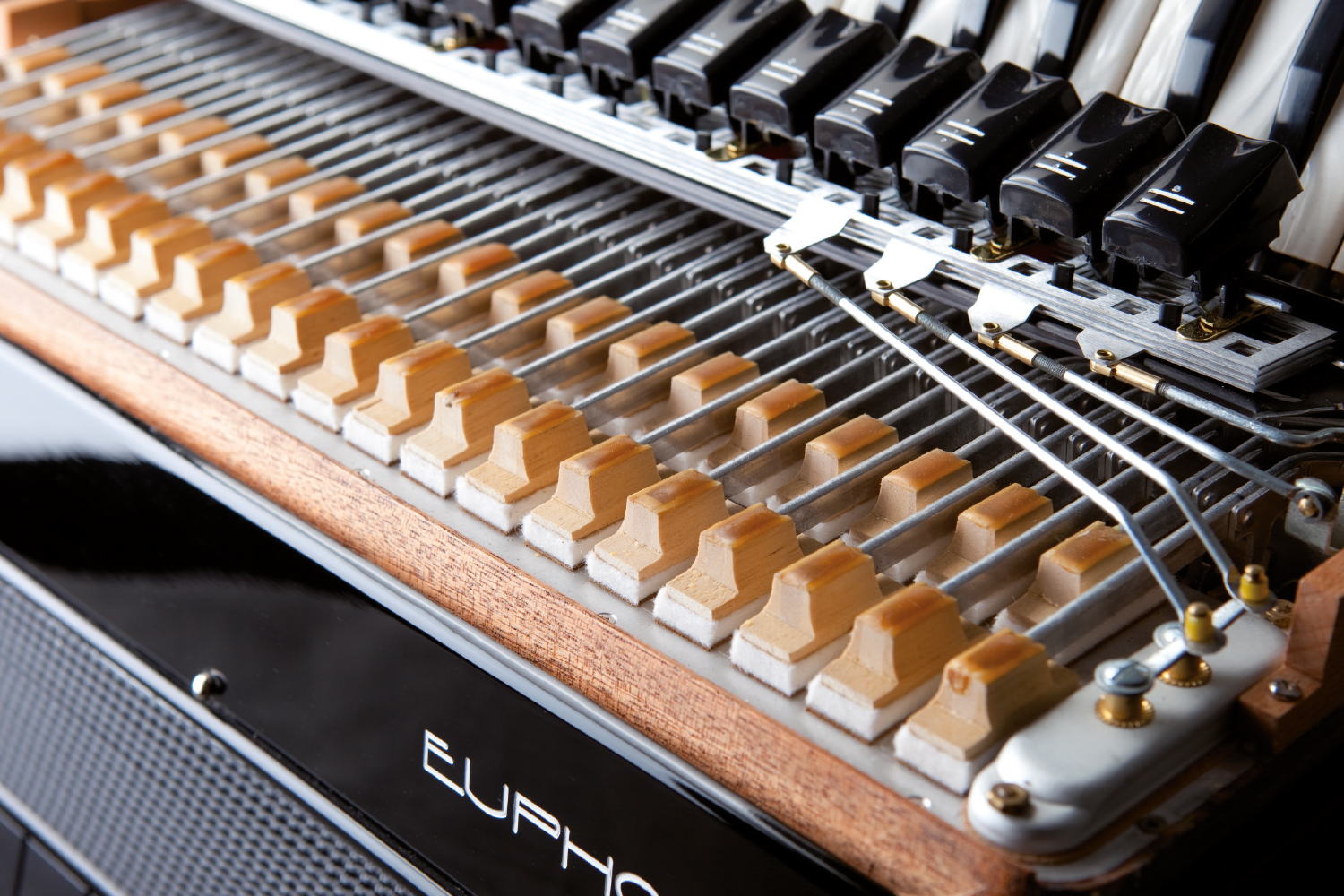 Whether with keys or buttons, the principle is the same: while pressing a key, a lever system lifts a pallet which allows the air to flow to the voice, thus producing the note which corresponds to the pressed key (the pallets can be easily seen by removing the grill). The buttons in a chromatic accordion are usually arranged in five rows. The first three rows, starting from the outer part, produce the whole chromatic scale, the other two rows are facilitations and repeat the first two ones. In Balkan countries, buttonboards with 6 rows of buttons are used. Register keys are located on the grill near the keyboard and operate plates at the bottom of the chamber. Such plates open and close the reeds making different combinations possible, a sort of sound mix. 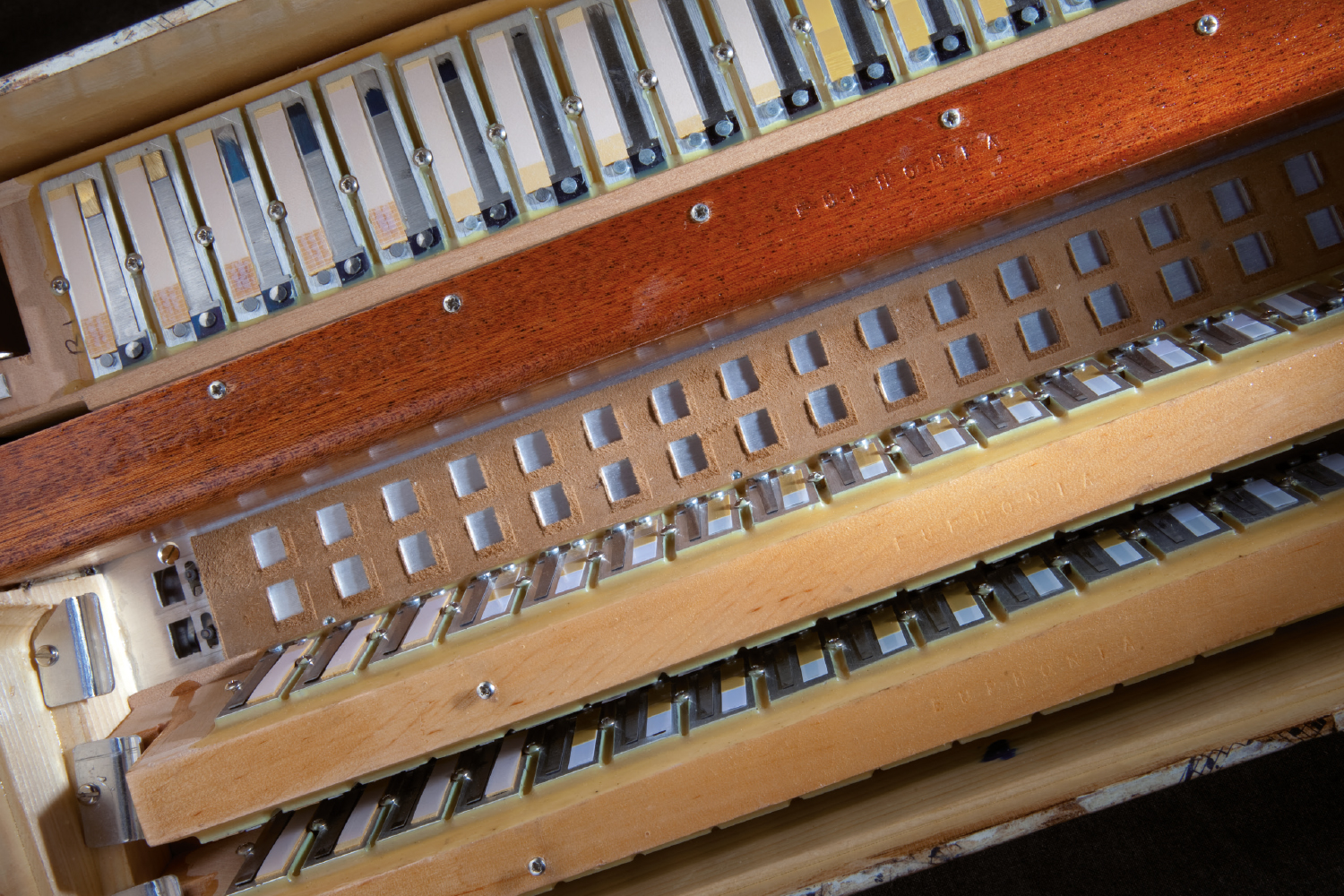 All professional accordions are fitted with a “cassotto” (tone chamber), that is a device which allows the sound to expand in a box-shaped hollow instead of going straight out of the body, thus producing the peculiar, nasal and boxed sound, typical of this instrument. In the cassotto there are usually one or two sets of voices; in classical instruments, there are a low octave and a clarinet (this type of instrument is improperly called “double-cassotto”); in instruments used to play popular music only the low octave is in the cassotto whilst the three clarinets are external, thus creating the abovementioned musette effect. 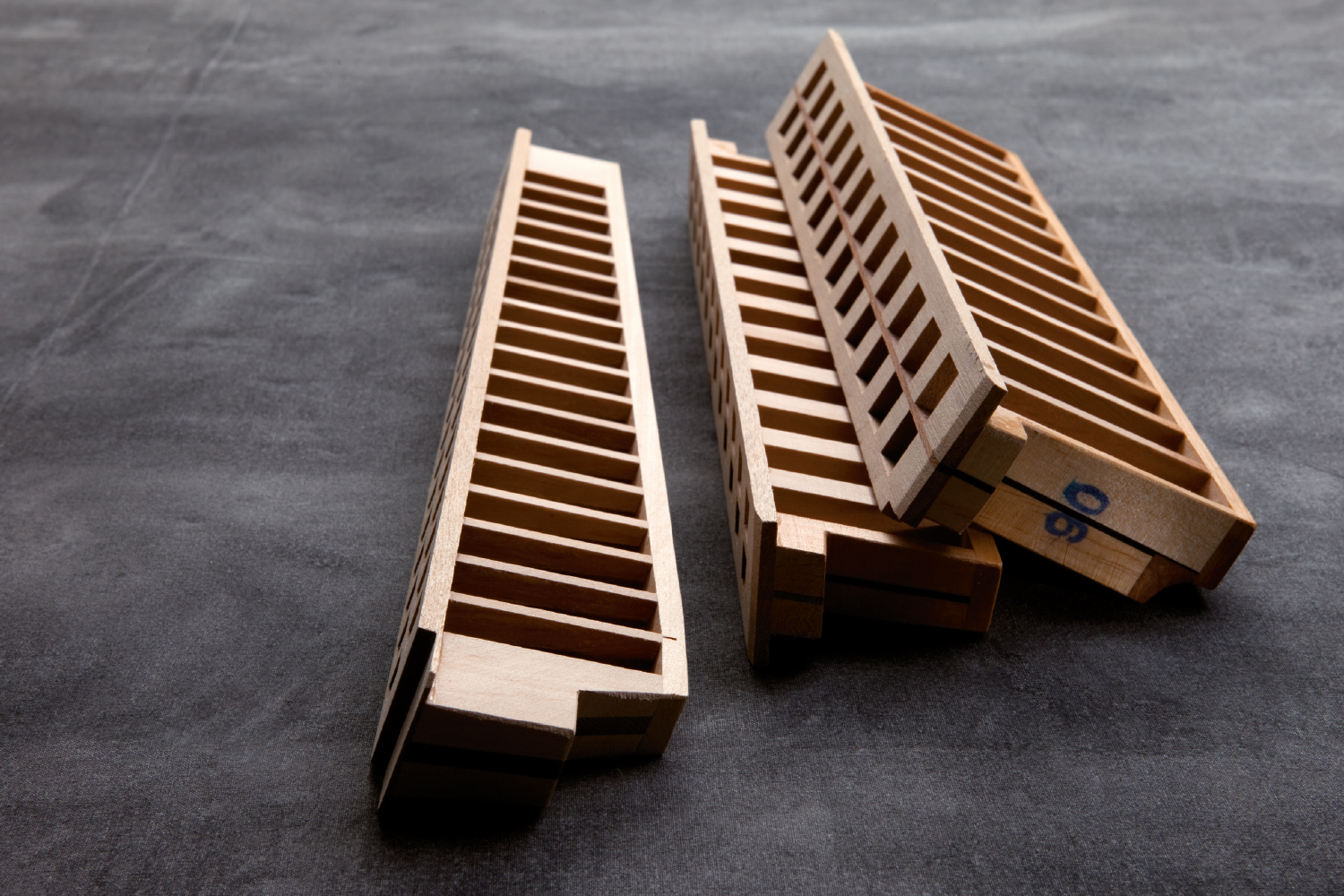 Sound boxes are fixed to the bellows with pins or screws. By separating the boxes from the bellows reedblocks can be seen. It is a delicate operation and it shouldn’t be done unless you are an expert. Reedblocks consist of a wooden frame with as many holes as the number of voices to be mounted. Each hole has a specific size depending on the size of the voice which will be mounted. Reedblocks can be made of fir wood, if voices are fixed with beewax, or alder wood when nails are used. 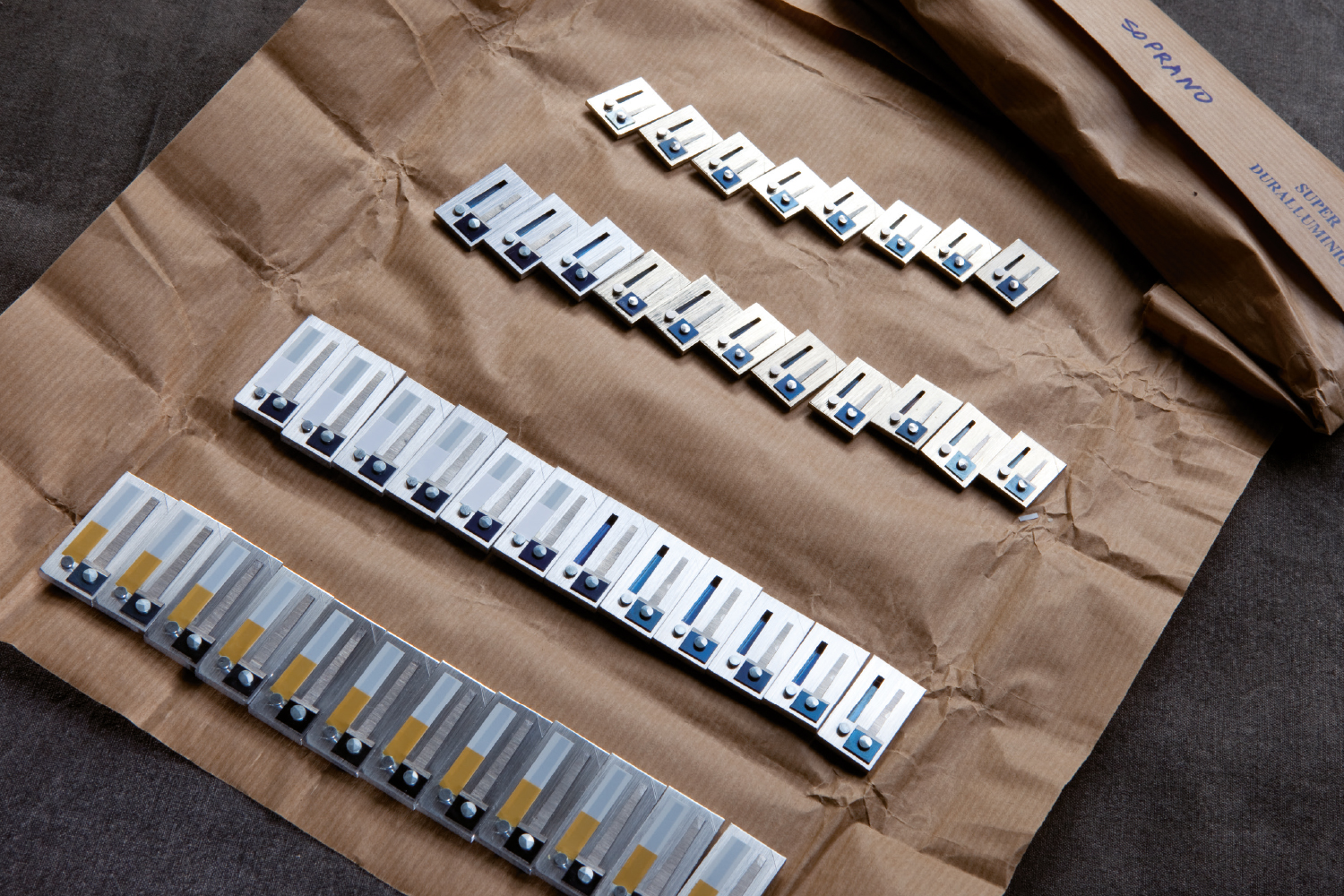 Voices are the heart of the accordion

Voices consist of a plate, usually made of aluminum alloy, were two reeds are riveted. The reeds are made of harmonic steel and mounted on opposite sides. The reason being that each reed can play only if the airflow comes from one direction, which depends on whether the bellows is pushed inward or pulled outward. Therefore, moving the bellows the airflow is reversed and each reed can produce a different note each. The reed is fitted with a leather strip which acts as a valve. In fact, it avoids air leakage by obstructing its passage through the reed that in that moment is not operated. Over the last years, leather valves have been replaced with synthetic ones in plastic leather. They are much lighter and do not block the passage of air, thus adding strength to sounds, especially sharp ones. Furthermore, they keep their grip over the time, unlike natural leathers. Nevertheless, leather is used for low notes because it offers a better timbre. 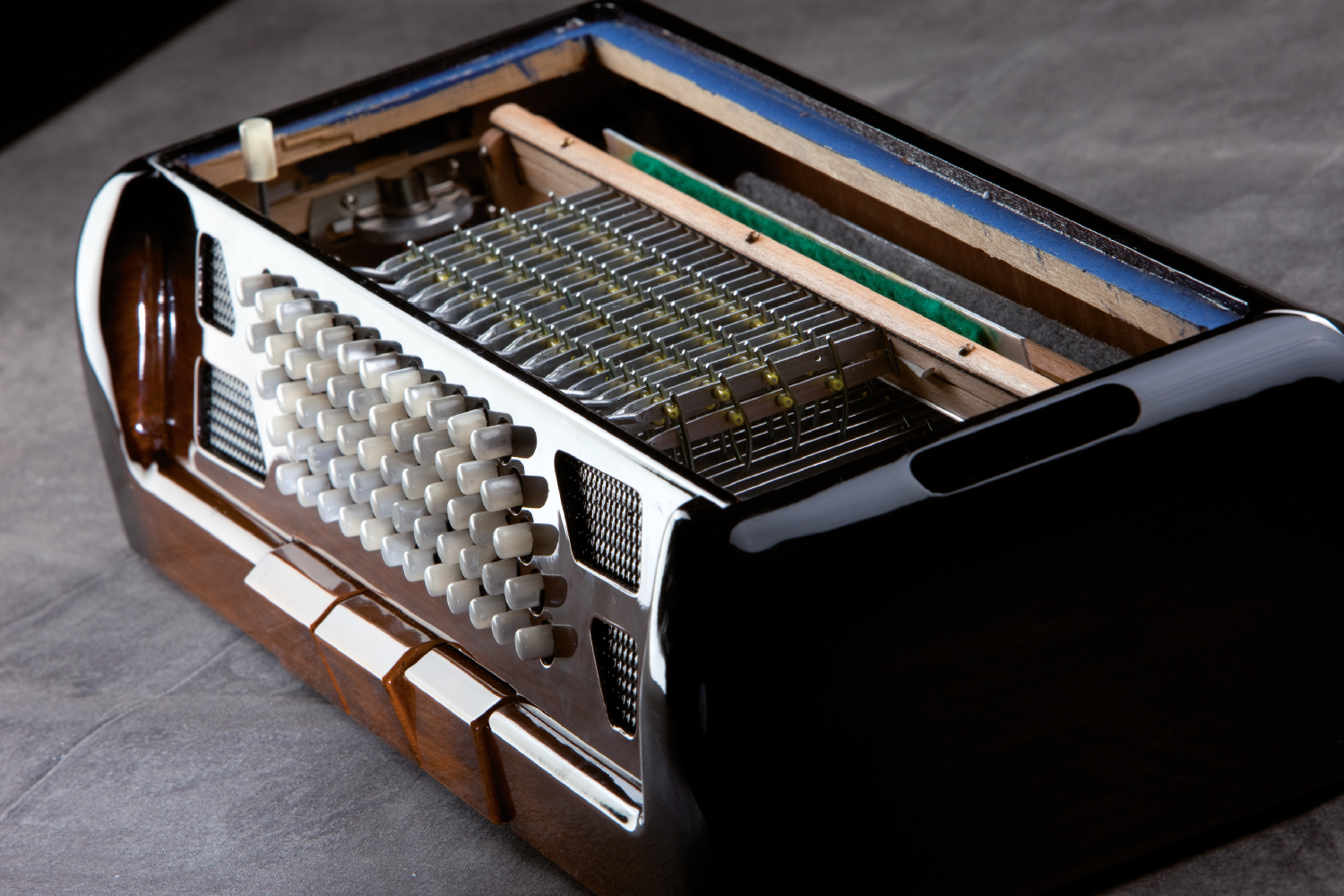 Removing the cover located under the bass strap, you can see the bass mechanism, u7n. This system is completely mechanical and consists of horizontal and vertical bars. When they move, they open the voice valves, allowing the entrance and exit of air depending on whether the bellows is pushed inward or pulled outward. The first two rows, starting from the registers, are doublebass and bass buttons, levers which open a valve only through a bar were a little peg is mounted. The other four rows are major, minor, seventh and diminished seventh chords. Such levers open three valves simultaneously, thus producing the desired chord. Chord buttons are fitted with two or three pegs on the bar, which open the valves of the corresponding chord. On the bass side of the accordion used to play classical music, there is a device called convertor which, through a complicated mechanism, allows the musician to shift from traditional basses to free note ones; all chord buttons produce single notes whilst the left hand can perform the same tune of an organ or piano. 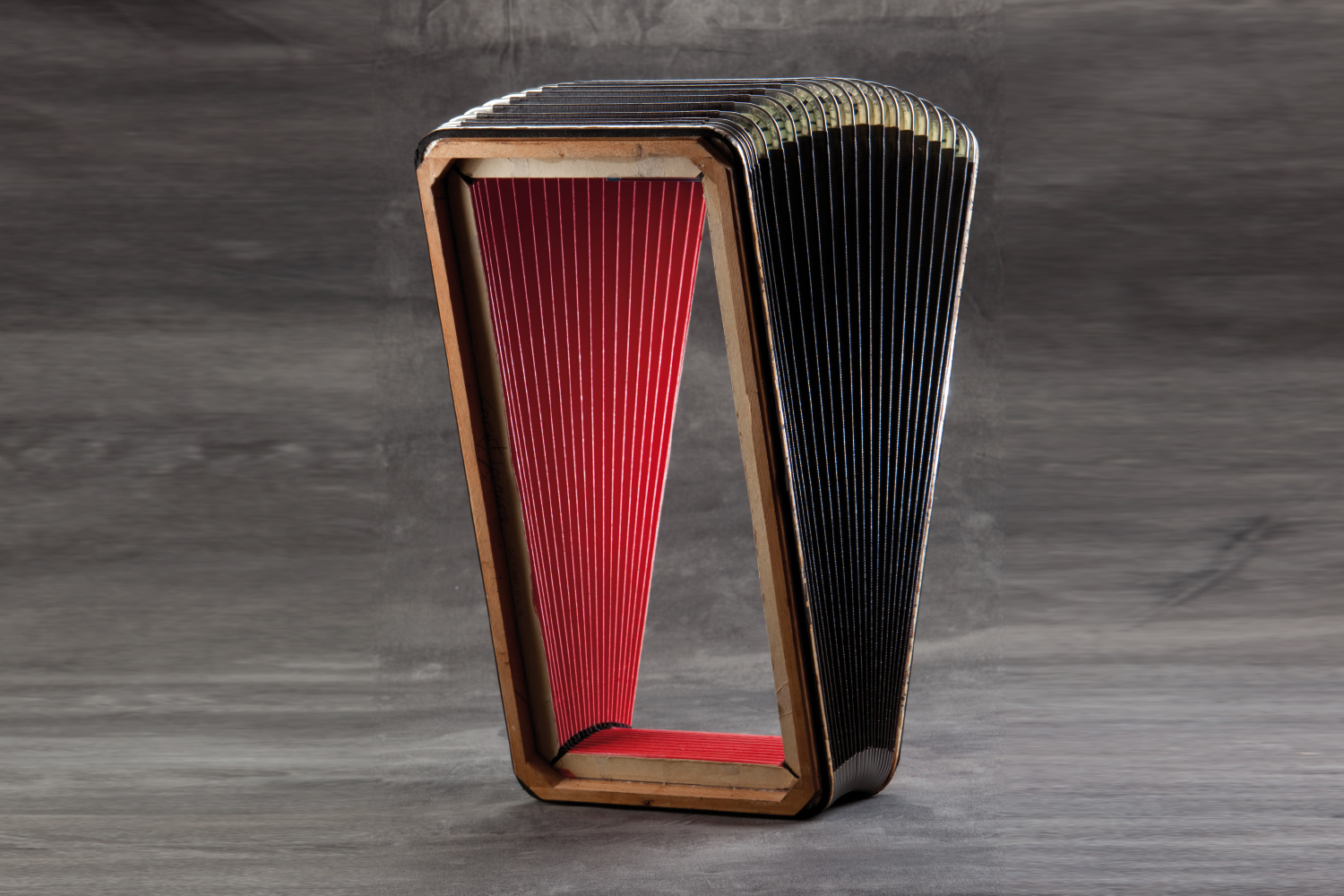 The Bellows: a pleated cardboard